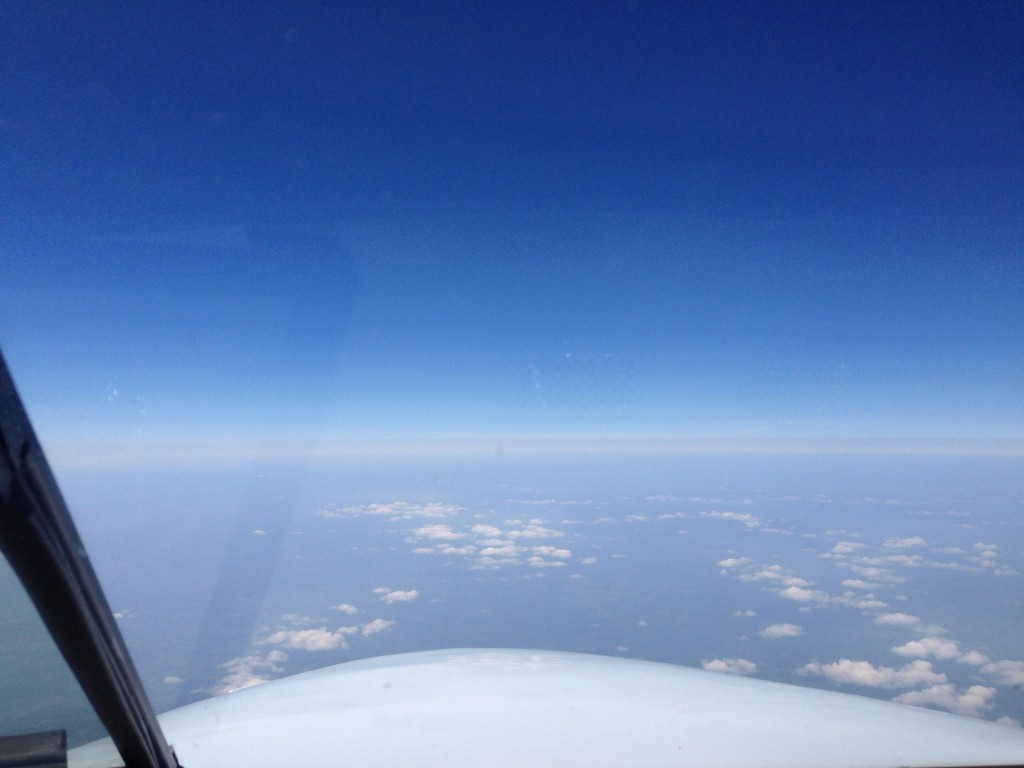 Sometimes, pushing limits is the responsible thing to do.

Most of the time, the most sensible way to fly an airplane is right in the middle of the “envelope” of its performance capabilities. Operating in the middle gives the widest margins of safety in normal circumstances. However, being a responsible pilot means being capable of using the aircraft safely throughout its entire envelope. For lower-performance aircraft, the envelope is pretty small. As performance increases, the corners of the envelope get farther apart, and being comfortable hitting them sometimes requires getting out of your comfort zone.

The best part of my job is flying brand-new airplanes. The Seneca V is my favorite, primarily because its performance envelope is much larger than the Cherokees and Seminoles I fly. That’s a polite, technical way of saying it flies higher and faster. The Seneca sports a pair of turbocharged engines capable of delivering maximum rated power continuously up to an altitude of about 20,000 feet, meaning the airplane should have no trouble at all climbing to its certified ceiling of 25,000 feet.

Most of my Seneca flights are short local flights, and I don’t fly nearly as high or as fast as the aircraft is capable of going. Two weeks ago, I got a chance to take a Seneca on a long cross-country trip. The airplane was equipped with every possible option, including an oxygen system. Even though the headwinds would be stronger at higher altitudes, the aircraft’s increased performance would compensate for them. I wouldn’t gain any time by flying higher, but I wouldn’t lose any, either.

I had only flown at altitudes requiring oxygen once or twice in flight school, and had never flown in the “flight levels” above 18,000 feet. It was definitely outside of my comfort zone, but it was within the capabilities of the airplane, and there were no other risk factors. It was a daytime flight, in good weather. It was just me in the airplane, so passenger comfort wasn’t a consideration. If things didn’t work out, I could fly lower. I knew I needed the experience, I didn’t know when I’d get another chance, and it was hard to imagine getting a better opportunity to try. It was time to push the envelope. I filed my flight plan for Flight Level 240, or 24,000 feet, the highest westbound altitude within the certification limits of the aircraft.

The Seneca didn’t skip a beat on the long climb, although running two engines at cruise climb power with full rich fuel mixture for that long consumed quite a bit of fuel. Once I levelled off, I was thrilled to see cruise speeds slightly better than the performance charts predicted. Headwinds were as advertised, and I ran calculations to be sure I would still be able to make it to my destination with a comfortable fuel reserve.

At high altitude, the air is less dense, meaning air molecules are literally fewer and farther between. An airplane depends on air molecules to generate lift, and therefore must go faster to stay airborne. But the airplane also relies on air molecules to produce power and to cool the cylinders of its engines. Running engines too hot for too long can cause damage and shorten the service life of expensive equipment. At 24,000 feet, the Seneca’s two $60,000 engines were working hard and getting hot. They were approaching the edge of their envelope.

There are three ways to cool off an airplane’s engines. First, the pilot can enrich the mixture of fuel to air. This puts more fuel through the engine than it can burn completely, and the extra unburned fuel cools off the cylinders, at the expense of some additional fuel flow, which decreases range. Second, the pilot can open flaps on the engine cowls, allowing more air to pass over the engines. This provides excellent cooling, but also creates drag, which slows the airplane down and reduces range. The third option is to reduce power by backing the throttles off, which also slows the airplane down. I used a combination of all three and after some fine tuning of the engine controls, got everything running smoothly at more comfortable temperatures at the expense of about six knots and an additional gallon per hour of fuel flow.

The headwind weakened during the second half of the flight, and I made it to my planned destination with well over an hour of fuel left. The ride was smooth and the view was spectacular from 24,000 feet. The oxygen mask was a little inconvenient, and talking on the built-in microphone resulted in radio transmissions that were sometimes difficult for air traffic control to understand.

Working the airplane, particularly the engines, as hard as I did is not something I’m going to do on every flight. Most of my future flights in the Seneca V will be done at lower altitudes that don’t require supplemental oxygen, squarely in the middle of the comfort zone for both the airplane and its occupants. But I’m glad I explored the envelope on a nice day when I wasn’t under pressure from weather or passengers or a tight schedule. I don’t know what my future missions will require, but now I’ll be able to use the capabilities of the airplane a little more confidently. And maybe, on nice days, I’ll continue to gently push the envelope. 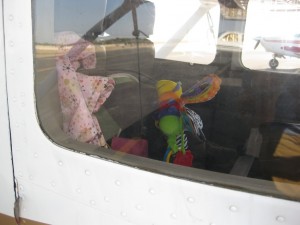 Last Saturday was the third time my wife and I have taken our infant daughter flying in a small airplane, and I think we’re finally starting to get it figured out.

There’s no good reason why a baby can’t come flying with you. There are, however, some extra considerations necessary for a small passenger. With a little preparation, the personal airplane can become a weekend getaway machine for the whole family.

Most car seats are also approved for use in aircraft by the FAA. If your seat is approved, there will be a sticker on it that says so. Seatbelts work about the same in airplanes as they do in cars, so there shouldn’t be any problem getting the seat secured, but it’s a good idea to check it out in advance, just to make sure.

We’ve found it works best to put the baby behind the pilot’s seat. In a Cessna 172, the pilot usually slides the seat forward after getting in. This means the non-flying parent in the right seat can slide back, reach behind the pilot, and have good access to baby in the back seat.

Sun protection is big deal, because airplanes are necessarily built like tiny flying greenhouses in order to afford the pilot a good view. Make sure you’ve got some way to give your passenger shade without blocking the windows.

Hearing protection is a must for everyone in the plane. Infants’ ears are especially susceptible to permanent damage. Earplugs are great, and easily available, but good luck getting them to stay in! And once they’re out, they’re a choking hazard, so you’d better have someone in the back seat to watch the kid the whole time.

This was our major find for last week: for $25 we got youth-sized protective earmuffs, that fit our 10-month-old baby just fine, from the gun department at a sporting goods store. She wore them the whole flight without a fuss.

Speaking of ears, remember babies haven’t had the opportunity to learn the Valsalva Maneuver, and may not be able to clear their ears as well as grownups during climbs and descents. Make sure your baby doesn’t have any kind of sinus blockage before flying. This is important for adults, too. Descents are harder on sinuses and ears than ascents, so plan to come down slowly. I’ve used 500-700 feet per minute with the baby and never had any problems. Sucking on a bottle will also help a baby clear her ears during an approach.

If you have any questions about physiology, talk to your flight surgeon.

For a small child, especially one who can’t see out the window, bring plenty of distractions and an extra parent to tend the child in flight. Single-pilot, single-parent operations probably aren’t a good idea until the kids are old enough to take care of themselves a little bit.

With a little extra planning, flying can enrich the lives of your entire family. An airplane can take you places and show you things you can’t see any other way. And what could be better for a pilot than sharing the things you love doing with the people you love most?

A long-term relationship with aviation is a lot like a romantic involvement with another person. There’s attraction, a first date, and excitement.

For a few lucky people, though, the love of flying develops like a steady marriage. Even though it’s the hundredth, or thousandth, time seeing the rolling shadowy forest canopy from above, or the moonlight sparkle on a black diamond ocean, or a blazing sunset aloft turn the whole world into glowing liquid gold, there are subtle differences each time and no day is ever quite the same as any other.

There are still storms, delays, breakdowns, and even emergencies bringing moments of sheer terror. But the happy marriage is based on understanding instead of raw attraction, commitment instead of bare promise.

Heading home into one sunset, high in smooth cold air, with baby finally sleeping peacefully in the back seat and wife looking contemplatively over the world almost a mile below, it would be easy to take the moment for granted. I could think it is no longer beautiful because the novelty has worn off and it’s not all that unusual for me to be taking my wife and daughter for an airplane ride. But in so doing I would miss the greater truth.

Instead of taking it for granted I savor it now so I can have it again later, in my memory, when the bills and the office can’t be avoided and the winds and rains keep me away from this peaceful place in the sky.

I am lucky to have this peculiar set of skills, which lets me see the sun sink in molten gold and spin the whole world around me on the tip of a banked wing. I’m luckier, still, to have a wife whose love is of understanding, and whose only caveat to my flying is that I take her with me.